We use words like ‘connect’ and ‘connections’ a lot – which is hardly surprising. But for Torrens Connect, those connections are real and can sometimes have remarkable results. 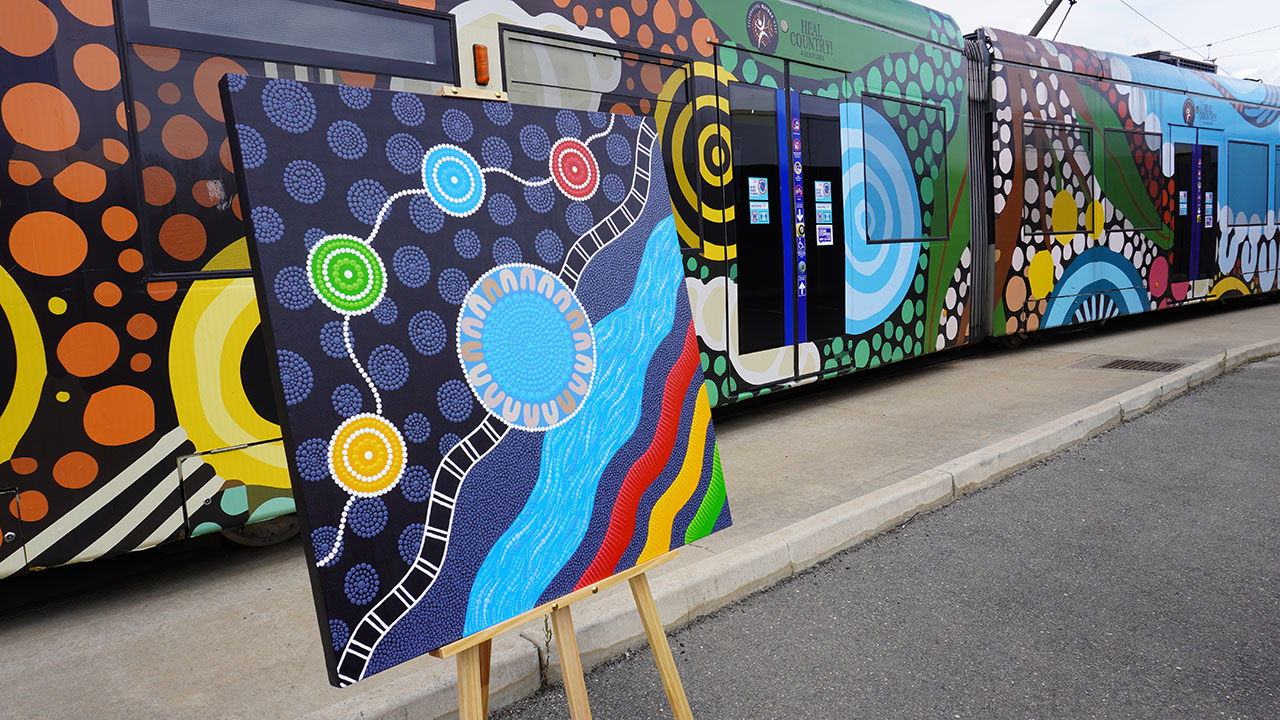 Kaurna/Ngarrindjeri artist Milly Sumner’s husband is a tram operator. Through the ‘Tramily’, as it is known to employees, Milly’s work became appreciated in the depot, resulting in her being commissioned to paint a work representing Torrens Connect.

“The focus for the painting was around Torrens Connect and how they connect with the community,” says Milly.

Milly has titled her work “Torrens Connecting with Community” and explains it as being based around the depot where employees come together on a daily basis who then branch off in different directions doing their various roles. “I think it’s important to highlight each individual member of Torrens Connect because they play a big part in the smooth operations of the tram service,” she says.

After a group of Torrens Connect employees took part in 2020’s NAIDOC Week March, members of the Customer Experience Team were approached on a tram by Rebecca Wessels, the CEO and Founder of Ochre Dawn, which led to an exchange of business cards.

A chance meeting between strangers on a tram might sound like a movie plot but it led to Ochre Dawn coming to represent Milly as a First Nations artist and digitising her painting for Torrens Connect.

“Ochre Dawn is a business that gets to work on really exciting projects like this one that share our culture with community and in commercial project settings,” says Rebecca. “We love working with people like Milly and sharing our stories in ways that’s really visually captivating but also impacting on our community and our economy.”

Milly says that “Torrens Connect is a multicultural organisation and the painting hopefully captures the many people from all different cultures and walks of life coming together to engage with the service, whether it’s inside the depot, or within the community.”

The painting captures the depot, tracks, and tram stops along the way. There are many ‘meeting places’ in the background representing the surrounding suburbs and the community.

“The thing about using Aboriginal symbols is they’re so universal, with not just one meaning. Meeting places can be used for so many different things: anywhere people gather, that’s a meeting place. I thought it was important to put several meeting places in the background because the tram service is out there in the community,” explains Milly.

For Milly, incorporating Torrens Connect’s corporate colours was a challenge as it was a substantially different colour palette to what she normally works with. “I took a step back and looked around at the colours of the area and I’ve incorporated the water, the earth, the sand and the trees.” she says.

The artwork has been incorporated into new lanyards for employees and will become increasingly used in Torrens Connect’s branding and livery.

Rebecca Wessels says, “What I love is that we get comments all the time that even from a simple lanyard, conversations start about important topics.”